Kristy Flores, HEAR Class of 2017, was raised on the South Side of Chicago by a single mother. Even as a child Kristy noticed many things that were lacking in their lives, and she was determined to do something better for herself.

From an early age, Kristy understood the impact that a higher education can have on a person’s life and she worked hard throughout her formative school years. She was rewarded for her dedication by being awarded a Daniel Murphy Scholarship (http://www.dmsf.org) which allowed her to attend Fenwick High School in Oak Park, a Catholic school where Kristy found the kind of supportive school environment she had been looking for. Incidentally, it was through Fenwick and Daniel Murphy that Kristy first heard of the HEAR Foundation, and the scholarships we provide.

Kristy had always known that she wanted to go to college, but knew this was an impossible dream without scholarships and other financial aid. Undaunted, she applied to 13 colleges and universities, all with one thing in common – food! Becoming a chef was Kristy’s dream and, coupling this with her desire for a higher education, she focused on schools that offered food science and nutrition as a major. The University of Missouri offered not only the major she was seeking, but also placed an emphasis on culinary arts – a passion of hers.

Knowing she would need financial assistance to attend school, Kristy applied for a HEAR Scholarship and was one of only four Chicagoland high school seniors to be selected in 2013. Kristy tells us that from the very first day of her journey with the HEAR Foundation, Dr. Ray Pollina, the HEAR Foundation’s Scholarship Chair, was one of her most important mentors and supporters. Kristy knows that the interview with HEAR changed her life forever.

Says Kristy, “It became especially easy to become optimistic about my future after I had found out I had been awarded a HEAR Scholarship.” She remembers bursting into tears when her teacher called her out of class and she saw the members of the HEAR Foundation, knowing that the scholarship would allow her a chance at a better future. 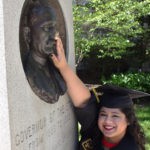 Kristy at her graduation!

That said, all the preparation in the world is not a guarantee for a smooth ride through college. While Kristy excelled academically, she struggled in other aspects of life during that time. She was on her own financially, and having left Illinois she lacked other forms of support as well. Without doubt, the lowest point during her academic career was the unexpected death of her mother in 2014. She returned home, laid her mother to rest and went back to school two weeks later, not because she didn’t care or wasn’t in pain, but because she saw the bigger picture. Once her mother passed away, she had to make sure of a plan for her future. Kristy had many achievements during her college career; receiving other scholarships and awards, getting her first job and subsequently first raise, living and working in a different country (you can read more on our website).  But her greatest achievement, Kristy says, remains having graduated. “Going back to school after suffering the loss of my mother was one of the best things I have ever accomplished.”

These last words are Kristy’s own… “During the difficult times throughout my college career, the support of the HEAR Foundation has always been present, even now that I am a college graduate. Members of the organization, including Dr. Ray Pollina and Vera, have long been allies and supporters in my life. Their roles have played a tremendous part in my success. One thing I can say about the HEAR Foundation that I had never anticipated, it is not just a scholarship foundation. I know this because they do not limit the care they have for each and every scholar. I now live in Glens Falls, and work at The Queensbury Hotel as a sous-chef thanks to members within the HEAR network. None of this would be possible without the care and guidance of people like Vera or Dr. Ray Pollina for people such as myself. They truly want the best for each and every scholar and I have seen this myself first hand. I am ever thankful for their continued support. Hopefully I will achieve my goal to move back to Italy for a short while, however no matter where my future takes me I will always know the part the HEAR Foundation has played in it. One day, when I achieve my biggest goal of being an executive chef and restaurant owner, I will be sure to give back to the organization that has given so much to me and I hope others will follow suit. Everyone deserves a chance at a better future, and I am beyond thankful that the HEAR Foundation allowed me one as well.”

Today, Kristy is the only person in her family to have attended and graduated from a four-year university. 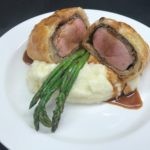 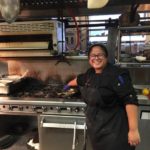 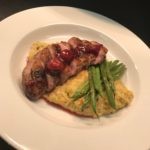 Above: Kristy and some of her delicious creations!

Kristy Flores
HEAR Class of 2017
Graduate of University of Missouri